The Laugh of the Black Medusa 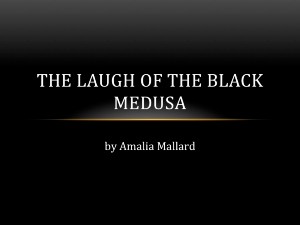 When Desiree Fairooz was removed from the 2017 U.S. Attorney General confirmation hearing, it wasn’t the first time a woman was persecuted for laughing out loud. In 2015, eleven women were kicked off a Napa Valley wine train, sparking the Twitter hashtag: #LaughingWhileBlack. Laughter in recorded music reveals how women circumvent patriarchy, point out false truths, create space for unhindered expression, and reconcile a divided mind. Maya Angelou called black laughter a “survival apparatus.” Yet, black women’s laughter was unheard until nearly 30 years after the inception of the recording industry – revealing feminist attitudes in a hidden second narrative signaled by the laugh. However, the use of laughter as a deliberate musical and literary device by women on record begins to rise in the 1960s. While Helene Cixous challenges the myth of Medusa in “The Laugh of the Medusa” (1976), Zora Neale Hurston revives the pre-Brer Rabbit/ trickster myth of High John De Conquer in 1943, “the source and soul of our laughter and song.” Both help us to consider how the “female trickster” has been constructed, revealed and reviled in recorded music.