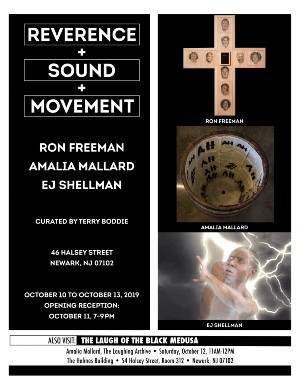 In the works by the artists Ron Freeman, Amalia Mallard and Eddie Shellman the human being is present and absent, sonic, kinetic and immobile. The impact on the viewer is both physical and psychological. In the sculptural work of Freeman they are traces, indexes of what once was. In Shellman’s site-specific installation they are fully articulated through the physicality of their presence as projected moving figures within a built environment. The sound of laughter is a subversive force in Mallard’s work. She examines the practice of suppressing the laughter of enslaved African during Jim Crow and connecting it to her reexamining and subversion of the Medusa myth.