A Workshop Production of Tiers, by reg e gaines 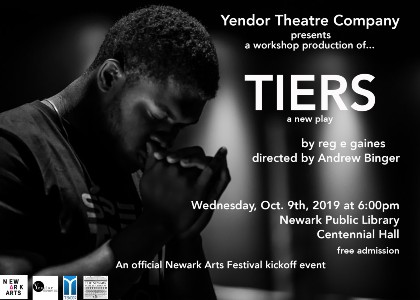 The Play
Set in 1970s Jersey City, Tiers follows the friendship of 4 young black men: Angelo, Earl, ‘Heads’ and ‘Ice.’ What starts out as a simple night of cards, drinks, and jokes among close friends, quickly turns violent. The established world suddenly becomes one of isolation. Tiers masterfully exposes the fragility of the male psyche while highlighting how rapidly even the greatest of friendships are tossed aside when a male’s ego is challenged.

About the writer, reg e gaines
reg e gaines has published four books of poetry including The Original Buckwheat and Abstract Sax. His poetry can be found in numerous anthologies, Aloud: Voices From The Nuyorican Poets Cafe, Bum Rush The Page, The Paterson Literary Review and Bomb Magazine. reg is a Tony Award winning playwright and Grammy nominated lyricist. He is currently writing and Producing a new musical, The 88, and has been commissioned to write a play, No Dutchman, about the poet Amiri Baraka.

Yendor Theatre Company (YTC)
YTC was founded in 2016 by Rodney Gilbert to address the need for theatre programming in the City of Newark. Building on the tremendous success of Yendor Arts, YTC strives to develop and produced works by underserved writers and present theatre reflective of the community in Newark. YTC works with women writers, writers of color and writers from the LGBTQ community to provide a safe space to create and share their work.